My story starts about 6 months ago when I noticed that the North Carolina Center for Automotive Research (NCCAR) was doing a track day with SCCA for Track Night in America and subsequently a Time Trial. While I couldn’t actually make it to either event, I was able to make it to the one scheduled for November 9-10. Historically, the weather has been sketchy, but let’s face it – I’ve done some strange weather track days so this shouldn’t be an issue!

For those unfamiliar with NCCAR, it was originally built to be a tire testing facility for General Motors. When that didn’t fully pan out, they relinquished control, and a gentlemen named Sam True and his team have been bringing the track up to standards to hold both SCCA and NASA sanctioned events. With that, SCCA is able to run clockwise for now, with counterclockwise being in the near future. (Photo credit NCCAR) 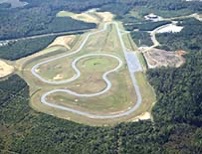 The track layout (pictured above) is made up of a 2 mile road course, with a long straight and several constant radius sweeping turns. That said, it can be a bit hard on tires, but it’s important to note that the surface of the track is probably one of the smoothest and nicest conditions I’ve ever been on, full stop. The reason for the heavy wear is because of the turns, not a surface condition. It’s also unique in that it’s not terribly hard on brakes – most of the direction changes can allow for speed scrubbing with the turn itself, so with my car, which is fairly high horsepower, I’m only applying the CarboTech XP12 brakes for 1, 2, 7, 9, and 11. Everywhere else is simply throttle modulation. Fortunately, the XP12’s do come up to temperature relatively quickly and hold heat well enough to be effective on this course, which is fortunate since braking is happening ~138mph!

As you pull into the facility, there is a guard house, a full gate (which is locked at night for security), and the office building which consists of 6 professionally equipped garages for vendors and teams to use for everything from R&D of new products, to product and equipment training for existing technologies. This office building is where we had our drivers meeting, registration, and also cookout/lunch/etc. As you leave this building and head to the track, there is a gravel paddock with electrical hookups for tools or camping. Beyond that is the entrance to the track itself.

To be frank, given that this track is less than an hour from my house, a challenging track with great opportunities for personal growth, and a place where many vendors can come to test new products, it’s a win in my book.

I’ve been an SCCA member for about two years now, and taken part in several events, thus far none have been timed or scored (Track Night in America, HPDE), so I was admittedly a bit nervous about doing these. In talking to the event coordinator, Stephen Miller, he assured me that it was just like a HPDE/TNIA with the exception of it having a clock placed on your lap time. I rented a transponder (approximate cost to buy one is about 500.00, rental was an extra 30.00 for the entire weekend), and zip-tied it to the tow hook which was placed on the back of my car. They broke us into individual driver groups (Novice, Intermediate, Advanced), and sent us out for qualifying. The purpose of qualifying is to ‘grid’ you for the timed/scored runs in an appropriate order so that you don’t catch up to people and have as much open-track as possible. Within my group there were 6 cars, and after qualifying I was placed 4th in the run group. I quickly advanced to 2nd where i stayed the majority of the day. They didn’t do ‘awards’ or trophies, however they did announce times and did a combination of the two times from day one and day two. I managed to place 3rd overall for the weekend in the timed laps, which for my first event at a brand new track I feel phenomenal about, especially when i see about 2 more seconds that i can shave off! For those curious, here’s my lap:

The second timed event we did was a track cross each day. This is where I was able to let the Launch Control of the Audi RS3 really shine – standing start to flying finish just like an auto cross, including the use of timing lights, except for on a race track with no cones causing pesky issues. In this event we were able to run two different configurations, one each day, and received three runs a piece. The first day, we ran counter clockwise (blue below for start and finish), and the second day we were clockwise (red for start and finish) the same as we had been running all weekend for the track portion. I finished 4th by .002 the first day, and a solid second on the second day. (Photo credit: SCCA) 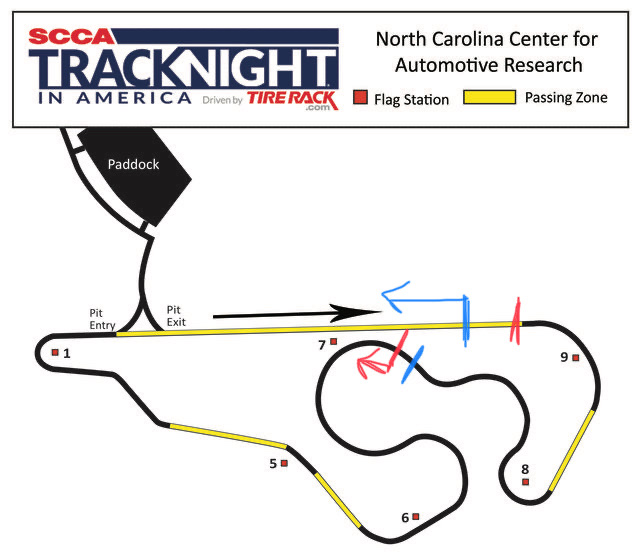 In addition to the track time, the SCCA folks did a phenomenal job of keeping everything moving, and treated us to a burger and brat lunch on both days, as well as a pork loin dinner Saturday evening. Those of you who were at the SCCA RunOffs at VIR will recognize the meal as Stephen cooked both of the meals!

Major kudos to the entire crew from the SCCA who took care of us all weekend and made sure rookies like myself didn’t make ourselves look bad!

Yes – it was cold in November! The temperature when I left my house Saturday morning at 6:30 am was around 27 degrees. It only warmed to 32 by the time we hit the track. Fortunately, I was on street tires and street brakes driving to the track, and then flipped everything over once I arrived. Everything had been nice and toasty in my car with me, so i had no issues coming up to temperature, however i did have some air pressure challenges throughout the day as things warmed up to 55 or so. The second day was even more volatile, starting at 31 and warming to just above 65 degrees! That caused me to start with around 32 PSI, and then continue to remove air as the day warmed up to try and keep finding my target of about 38 PSI. I used the turns in the track to help warm things up, essentially turning really hard while holding about 40mph and then letting off, then turning back in, creating a zig-zag in the corners on the initial lap.

The big question mark was the Accelera 651 Sport Tires. My car (for track purposes) runs 265/30-19, which they happen to have. I purchased a set for just over 450.00, had them installed at Black Forest Industries in Raleigh, NC, and was out the door just over 500.00. For a track tire, even if it only last half the season, it’s a far cry cheaper than the Pilot Sport Cup 2’s that I was running. I’ll to a further dedicated review on the tires, but sufficed to say, they enabled me to compete at a high level, and I was quite happy with the resulting traction for all phases of the day. I *really* want to see what they do when they actually warm up and it’s 70+ outside. Furthermore, I can say that the Carbotech XP12’s can over-brake the tire ever-so-slightly. I actually think I could get a bit more out of the entire setup with a different alignment, which will be part of my winter projects!

I’m going to do a dedicated write up on how to get around NCCAR, as well as a review of the tires in their own posts. I’m completely thrilled with how the weekend went, how the organization was handled, and how my car performed in this environment. The Accelera Tires were an unknown and worked incredibly well. The Carbotech brake pads were a known, and continue to be as reliable and dependable as ever.

If I could provide advice to myself, as well as others – do not let a new track, or new format for an event, such as a time trial, dissuade you from heading out to the track. I was honestly hesitant to come out since the time trial aspect intimidated me, and the fact that I had some additional modifications to make to fit fully into T2 with my car. Go anyways! You’ll learn, have the support of your fellow drivers and coaches, and come away with an experience that you can re-use elsewhere.